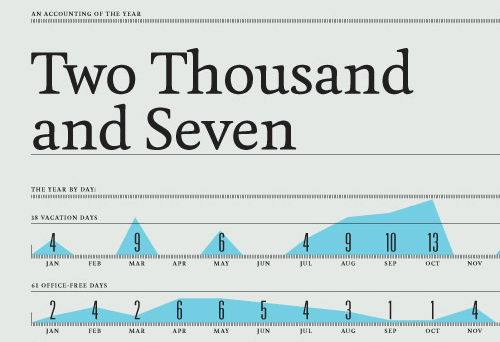 Back in 2008, right before I dropped out of school to focus on design, I came across a small blue book called the Feltron 2007 Annual Report. I probably spent thee hours combing over every single visualization in all 14 pages, in absolute awe. As someone who is obsessed with numbers, tracking, data, and personal analytics, the Annual Report served as sort of an ignition source for my love of design. It is a masterpiece.

A few weeks later, as I was planning the next five years of schooling that would be required for me to become a doctor, I got a weird feeling… that maybe I should drop out and start designing instead. I’d always enjoyed designing things as a hobby, but for the first time, as I stared at class descriptions for multivariate calculus and obscure human physiology, I recalled the feeling of awe I got while I was reading Feltron’s report. It made my decision easy. I dropped out and joined a startup in San Francisco.

Ever since that moment, I’ve wanted to create something like the Annual Report for myself, but I wanted it to be real-time and automated. Unfortunately, every time I tried to design it, it never came out the way I had hoped. It started with an exact replica of Feltron’s report, built in HTML, with a php backend that I built sometime during the end of 2008. It then progressed to a timeline that I built for my blog, at dustincurtis.com/about.html. A couple years later, after noticing the attention that about page had received, I decided to hack something together that would allow anyone to make a timeline for themselves. It was a little experiment called Lifepath.me.

The guy who designed the Annual Report, Nicholas Felton, now works at Facebook, on Facebook Timelines. He was the inspiration for me to create Lifepath.me, and then he went to Facebook and did a better job than I could have. I think that’s awesome.

In response to the Quora question here: (Is Facebook Timeline ripping off Lifepath.me?): no, I don’t think Facebook “ripped off” Lifepath.me with Timelines. Facebook Timelines are way more awesome, way better designed, and built for a way bigger audience. But I don’t think it would really matter if they did rip it off. Facebook has the unique ability to take ordinary raw materials, like ideas, concepts, and technology demos, and package them up in a way that uses their wealth of data and appeals to a huge audience. That’s a competitive advantage to being the major player, and to having some of the most talented designers and engineers in the world.

In a blog post today announcing Twitter’s new tailored suggestions system is something that has left me shocked: an overt admission by Twitter that it is transparently tracking your movements around the web. Othman Laraki, on the Twitter... Continue →