About ten days ago, when I went to update a few apps in the App Store on my Mac, I was met with a curious error. 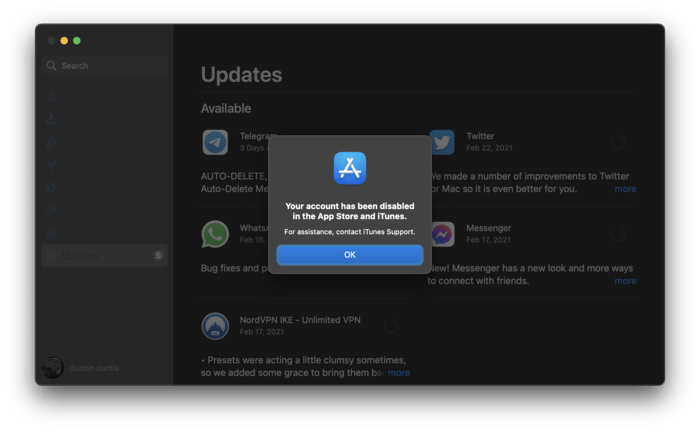 The internet is filled with stories from people whose Google accounts were locked for unexplained reasons, causing them to lose all of their data, including years of email, so I was somewhat concerned. But I’d never heard of similar cases involving Apple’s services, and I wouldn’t expect such behavior from a customer-focused company like Apple, so I figured it was a glitch and made a mental note to try again later.

The next day, Music.app stopped working. 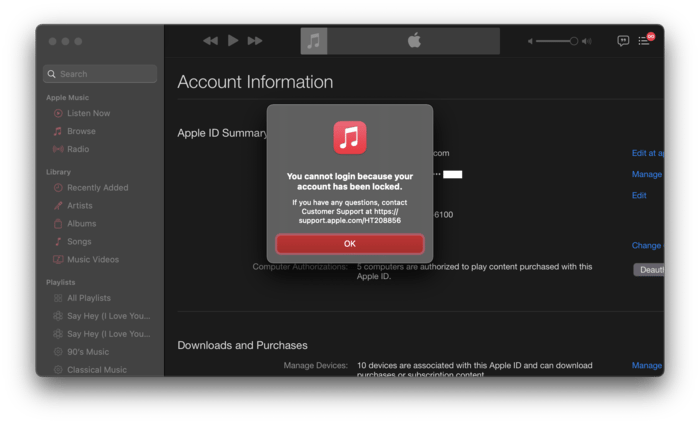 Now I was genuinely worried. I checked my phone and neither the App Store nor Apple Music would work there, either. A few minutes later, Calendar popped up an error – it had stopped syncing. I immediately tried to call Apple Support from my Mac, but Apple’s Handoff feature had been disabled as well.

The first person I spoke to at Apple spent a while researching the issue and then told me there was nothing she could do but escalate the issue, and that I should expect a call “hopefully” within the next day. I asked what the problem might be, and she seemed as confused as I was. Although some Apple services were still working, like iMessage (thank God) and Photos, I was terrified that more services would suddenly become inaccessible or that I would lose the considerable amount of data I have stored in iCloud.

A couple of days later, I became impatient and contacted Apple Support again. This time, the representative mumbled something about Apple Card before saying that he also had no power to help me. Apple ID was a different department, he said, and they could only be contacted by email. He emailed them. I continued to wait.

The next time I tried to use my Apple Card, it was declined. Strange. I checked the Wallet app, and the balance was below the limit. I remembered the Apple support representative mumbling about Apple Card, so I did some digging through my email to see if I could find a connection.

As it turns out, my bank account number changed in January, causing Apple Card autopay to fail. Then the Apple Store made a charge on the card. Less than fifteen days after that, my App Store, iCloud, Apple Music, and Apple ID accounts had all been disabled by Apple Card.

In mid-January, I bought an M1 MacBook Pro. The checkout flow offered a trade-in credit for an old MacBook Pro I had laying around. The Apple Store said I would receive a “trade-in kit” by mail and then have two weeks to send the old MacBook to Apple. Sounds easy, and definitely a very Apple-like experience.

But the trade-in kit never arrived. I had forgotten about it. When I received an email in mid-February asking about the trade-in, I responded (as it had invited me to do) explaining that I never received the kit and asked for another one. I didn’t get a response.

Very soon after, it seems that Apple simply added the amount of the credit I received when I purchased the M1 MacBook Pro to my Apple Card balance. Normally, this wouldn’t be a problem. Imagine if I had used any other credit card – it would have just been an ordinary charge. But because it was the Apple Store and Apple Card, apparently, things escalated very quickly.

On February 15th, Apple sent me this email:

We’ve been unable to collect full payment for your new iPhone. As a result, we will block the device on the order from further access to the Apple iTunes and Mac App stores, and disable all accounts associated with the device purchased on the order.

To resolve this issue, please call 1-877-255-5923 to speak with an Apple Card Specialist at Goldman Sachs. Once the issue has been resolved, reply to this email so we can charge your card for the difference in value.

For your protection, do not submit credit card information via email.

It appears as though charges from Apple are special, and if your account is not 100% current, Apple will quickly take drastic action. Unfortunately, this email got lost in my inbox and I didn’t see it until I went looking. But it is extremely concerning for several reasons.

After fixing the Apple Card issue, I replied to the email as it says, and received this in response: 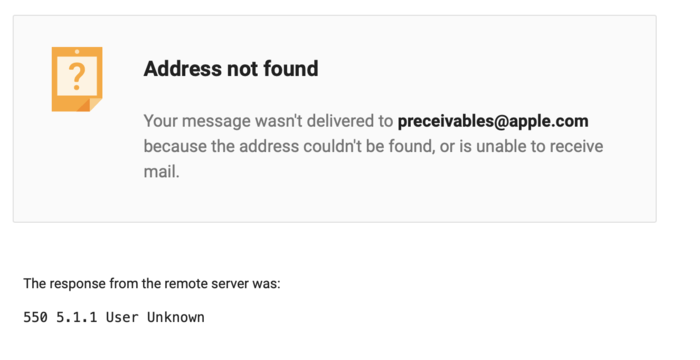 By this point, Apple Support had been unable to help me – or to even identify the issue. My App Store, Apple Music, iCloud, and Apple ID accounts were disabled. Replying to the email as instructed resulted in a bounce.

So I used Apple Business Chat to talk with Goldman Sachs. The representative there seemed confused, asked me to wait for quite a while, and then said the only way to reactivate my Apple ID was for him to email a department at Apple and wait for a call back within “a few days”.

Earlier today, I received a call from someone at Apple who explained that I had found the right department – finally! – but that the Apple account re-activation team can only be contacted by email and the process takes at least 3-5 business days. He emailed them.

And now I am once again waiting.

Update: My accounts have been reactivated.

Steven Levy interviewed Bill Gates for Wired, and it is quite an illuminating conversation. In past public appearances, Gates – like most experts – has attempted to walk the line between antagonizing the Trump administration and... Continue →