From The Verge on the new Motorola Droid RAZR:

So is the Droid RAZR worth Motorola’s marketing blitz? Is it the phone to get? Well, probably not. While the hardware engineering required to stuff the internals of the Bionic into the thinnest smartphone design on the market is nothing short of amazing, the compromise on display quality needed to get there simply isn’t worth it. 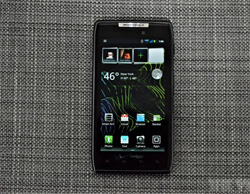 It’s amazing that Motorola keeps pumping out these pieces of junk. Each phone has a little gimmick–in the case of the RAZR, it’s thinness–at the expense of every other important aspect of the user experience. The display technology used on the Droid RAZR is called Super AMOLED, and while it is possible to cram one of these displays into a very thin profile, the screen itself has atrocious color reproduction and litters the viewing area with strange red lines dangling off normal pixels. After looking at a Super AMOLED+ display for a while, when you look up, the real world seems desaturated.

Why does Motorola continually pick gimmicks and then force truly awful phones designed around them through the pipeline? They’ve done it with the Photon (with WiMax), with the Atrix (which has a bizarre HD “lap dock” thing), and with the Xoom (to take advantage of the tablet craze). Do they really just want to squeeze out a few more sales to some suckers in the Verizon Wireless or AT&T store? They need to make fewer, higher quality phones and devices that people actually want to use.

One of the major manufacturers–Motorola, HTC, Samsung, anyone–needs to sit down their designers and engineers in the same room for a very long time to think about every aspect of the mobile experience, and then just build a generally solid, beautiful, phone, without the gimmicks.

Now that it owns Motorola Mobility, maybe Google will finally be able to do this with the next Nexus phone… or maybe the one after that.

The problem with shit work is that no one likes doing it, but an awful lot of people say they do. Excellent article by Zach Holman about the problems with features that require difficult up front work and constant curation. When I signed... Continue →