This morning, I received a LinkedIn message from a man named James Holm, who identified himself as a corporate recruiter with Weyland Industries. Weyland is the corporation that funded the the Prometheus project in the upcoming Ridley Scott movie of the same name. 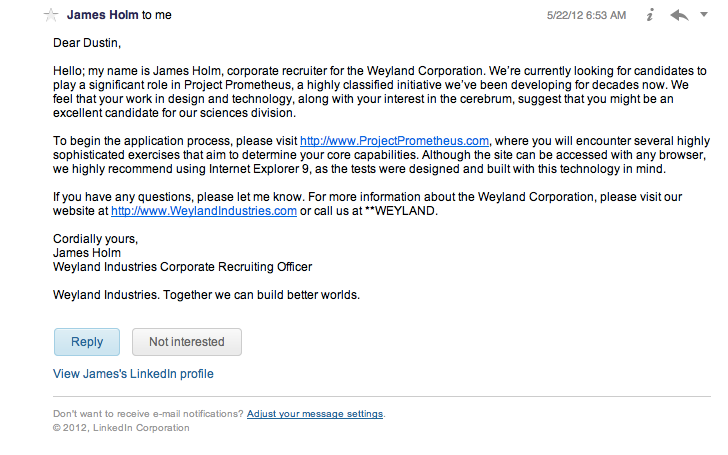 This message was clearly tailored specifically for me, and I think it’s pretty awesome. But it does raise some interesting questions about the divide between so-called viral marketing and reality. Mr. Holm has a complete profile on LinkedIn which documents his career. But he does not exist.

Because these kinds of campaigns have to exploit existing reality, marketers have to find places where the benefit of advertising revenue for a distribution, content, or platform company (like LinkedIn) outweighs the cost to that company of sacrificing user trust in their experience. In this case, LinkedIn was probably paid a bundle of money to allow Prometheus’ marketers to create fake profiles and send fake messages to users.

The result is that LinkedIn sold my reality to Fox so they could exploit it for the few seconds before I realized the message was fake. But it’s that moment of realization that makes this sort of thing enjoyable. It ends up being net positive for everyone. LinkedIn gets money, Prometheus gets more exposure, and I get a satisfying moment of realization.

Hilariously, in this instance, the marketers became suckers in their own game, and chose a poor tertiary partner that basically ruined the experience for me. Microsoft’s IE 9 advertising is horrendous, and I can’t imagine that it’s worth the enormous expense I’m sure they had to pay Fox for such a blatant and absurd inclusion in the LinkedIn message.

See also: The Game, which is based on similar themes

“It’s almost a mathematical impossibility to imagine that, out of the thousands of things for sale on a given day, the most attractively priced is the one being sold by a knowledgeable seller (company insiders) to a less-knowledgeable... Continue →