A few months ago, in an article called 3.5 Inches, I wrote that the iPhone’s 3.5-inch screen was the perfect size for human thumb reach. Now that the iPhone 5 has been released with its larger 4-inch screen, I think it’s time to re-evaluate the issue. 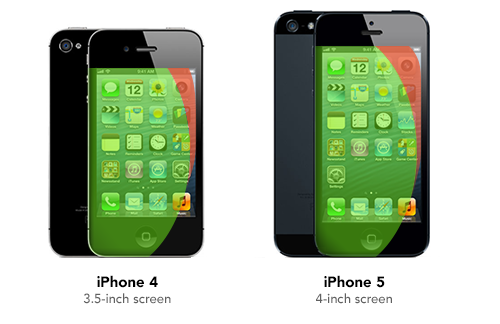 After using the iPhone 5 for more than a week, I stand by my original thoughts: four inches is too big for my thumb to comfortably reach to all areas of the screen while holding the phone one-handed. In my left hand, it’s just a little bit too uncomfortable to reach the far upper right corner of the screen, especially in situations where I need to touch the “cancel” or “add new item” button. This is especially obvious when entering an address in Safari or Maps while walking down the street. Or when trying to touch the “next message” down arrow in Mail. Or when adding an event to Calendar. Or when creating a Tweet in Tweetbot.

Oddly, Apple has made an uncharacteristically big deal about reachability with the new screen size in ads and marketing materials. It almost seems defensive, which is especially odd considering that normal people will probably never even consider or notice whether their thumb reaches to the edges of the screen (most people will just be inconvenienced by having to contort their hand, but they’ll probably not think to blame it on Apple). Plus, Apple’s marketing usually keeps design implementation details like these to themselves.

Regardless of the actual impact from the screen size change, I think Apple is being somewhat dishonest in their argument for reachability; for example, the following image on the iPod Touch’s Design page shows a person holding the device with their hand pushed much further up the side of the iPod than I would naturally hold it:

When I pick up an iPhone or iPod Touch, the device naturally gravitates to a more stable position, further down and cupped into my palm. Apple shows a slightly exaggerated representation of this in an image on the iPhone 5’s features page: 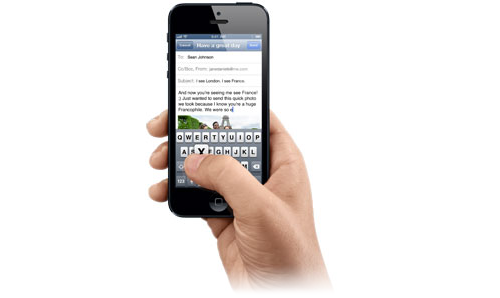 It’s easy to see Apple’s thinking here – the benefits of having half an inch more of display area far outweigh the downsides in reachability. Every area of the screen is reachable, after all (unlike many Android phones with 4-inch+ screens), it’s just slightly uncomfortable. The extra space is so valuable when viewing lists and long web pages, though, that it’s not even a tough design question. But don’t be fooled into thinking the display size change happened in isolation–the introduction of a larger screen on iPhone 5 in particular is no accident.

Four inches is only now barely acceptable on iPhone 5 because:

As iPhones get thinner and lighter, the reachability problem will become less and less of an issue. But the facts are clear: until we have wafer-thin, impossibly light phones, it will be harder to use 4-inch screens one-handed than it is to use 3.5-inch ones. Even so, the benefits vastly outweigh the downsides. iPhone 5’s screen only barely passes the ergonomic acceptability test, but the software benefits that come from that extra half an inch hugely improve the experience of using the phone.

Life is too short to be a boring company

Groupon’s S-1 filing included a letter from its CEO, Andrew Mason, that I somehow missed the first time around. It contained this awesome gem: We want the time people spend with Groupon to be memorable. Life is too short to be a boring... Continue →